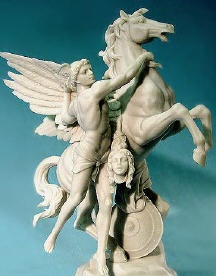 The Myth of Pegasus

Pegasus — the name has become quite popular over the years.  From movies to video games to books, the winged horse has made its appearance and captured the hearts of audiences everywhere.  But where did this magnificent creature come from? How was it created? 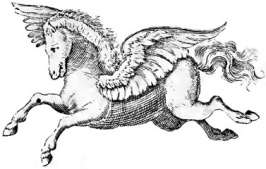 According to Greek mythology, Pegasus was born from the blood of the severed head of Medusa.  A white stallion with wings, Pegasus was gifted to the Muses who accepted him with open arms. According to myth, when he arrived, the creature was so delighted that he stomped his hooves on the ground and from beneath them sprang the stream Hippocrene which is found on Mount Helicon.  This spring became known as the fountain of the Muses. Of course, there are other versions of this story, including that when the Muses sang the mountain would rumble in joy, and Poseidon told Pegasus to kick it to make it stop, thus opening the spring.

As well as causing streams to bubble up, Pegasus was also made famous when he was tamed by the great hero Bellerophon who had been gifted a bridle from the goddess Hera.  Bellerophon captured the creature, eventually riding him in battle against the chimera. Once Bellerophon is killed, Pegasus finds himself a servant of Zeus, charged with carrying his thunderbolt.  After years of faithful service, Zeus honors him by creating a constellation.

Pegasus was a son of Poseidon and Medusa, birthed from her blood.  He was a gift to the Muses, a loyal steed to the hero Bellerophon, and a faithful servant to the god Zeus.  Pegasus, with his white coat and fluffy wings, was a majestic, wild beast, and he will be forever immortalized amongst the stars.