With autumn fastly approaching, and the trees losing their leaves, it is always important to remember the traditions that come along with this time of year.  Whether it’s pumpkin picking or visiting the graves of our ancestors, the autumnal equinox has become a center of tradition and folklore around the world. Instead of focusing on one, however, we will be taking a brief look at a few different cultures and how they celebrate the change of season. 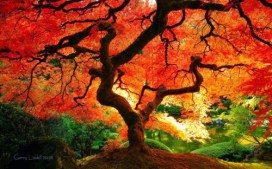 Paganism has always had roots tied with the natural world, and the autumnal equinox is no exception.  This equinox, in the pagan tradition, is called Mabon — or Second Harvest. Mabon is a time in which pagans will give thanks to the summer and pay respects to the approaching darkness.  A few rituals that tend to be associated with Mabon include — but are certainly not limited to — the building of an altar with harvested fruits and vegetables, the gathering and feasting of apples, offering apples to the goddess, and sharing food with the community.

While pagan traditions tend to lean towards the harvest itself, Japanese tradition tends to focus inward towards their own family and ancestors.  However, it isn’t just the autumnal equinox but both, and these periods are called Ohigan. According to Japanese Buddhist beliefs, the land of the afterlife is due west, and during these times the sun sets directly west, causing these solstices to become symbolic of both the deceased and the transitions of life.  During the weeks surrounding the equinoxes, it is common to visit both your living relatives and the graves of one’s ancestors in order to both pay respect and clean the grave site, leaving flowers behind when you depart.

Of course, pagan tradition isn’t the only one that celebrates the equinox with community and harvests, and Japanese Buddhist beliefs aren’t the only ones who focus on their ancestors.  However, we should also take a moment to consider the complete opposite of rituals and folklore that have developed over time, and so we will also be taking a look at the Western traditions as well.  Celebrations that surround the time of the fall equinox tend to be less about some of our older traditions and more about different activities that are celebrated such as county fairs and festivals, apple and pumpkin picking, decorating with the images of fall from leaves to fruits and vegetables and blowing Halloween way out of proportion.  And though we do not celebrate some of our ancestors’ traditions, we do have a feast that finishes off the fall season.

So whether or not you still practice your own traditions or you are celebrating with festivals and decorating with pumpkins, each tradition surrounding the autumnal equinox is unique and centered around the cultural beliefs of the people.  One thing that remains the same, however, is the idea that the equinox brings along change.